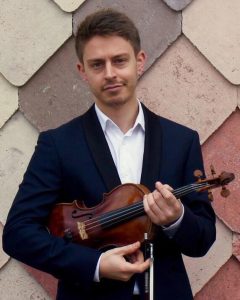 Guy is a graduate of the Guildhall School of Music and  Drama Artist Masters Programme and completed his undergraduate degree in Music at Robinson College, Cambridge. He has appeared as chamber musician and soloist at the Wigmore Hall, St. Johns’ Smith Square and many other high profile venues throughout the UK, Europe and Asia. He has performed concerti by Mendelssohn, Tchaikovsky, Mozart, Bach and Vivaldi and regularly appeared as a soloist with the European Union Chamber Orchestra, whilst filling the role of principal second violin. He works extensively in the world of historical performance and is a regular co-leader of Gramophone award winning ensemble, La Serenissima. He is principal second violin of the 12 Ensemble, London’s unconducted string orchestra 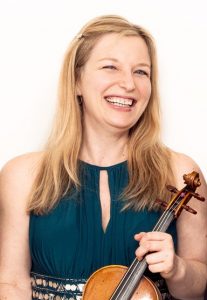 Anna read music at St Catharine’s College, Cambridge and then studied violin with Erich Gruenberg as a postgraduate scholar at the Royal Academy of Music. She has also won awards from the Martin Musical Scholarship Fund and the Countess of Munster Musical Trust. Anna is a member of the 1st Violin section of the BBC Symphony Orchestra, violinist in the Elgin String Quartet and leader of the Jersey Chamber Orchestra and the Little Orchestra.

Aside from the BBCSO, Anna has worked with most of the UK’s professional orchestras, with several in a principal role. As a guest she has performed as Principal 2nd Violin with the Royal Philharmonic, BBC Symphony, Bournemouth Symphony and Royal Liverpool Philharmonic Orchestras, as leader of the St Endellion and Presteigne Festival Orchestras, Orpheus Sinfonia and Sinfonia Cymru, and as Second Concertmaster of the Ostrobothnian Chamber Orchestra (Finland). As well as concerts with the Elgin quartet in the UK, Germany, Norway and France, Anna performs a great deal of chamber music.  She was a founder member of the Lawson Piano Trio, and has played as guest 2nd violin in the Tippett Quartet and guest leader of the Berkeley Ensemble.  She recently performed Brahms’ Clarinet Quintet in the Jersey Liberation Festival with Michael Collins, Alexander Sitkovetsy, Rachel Roberts and Leonard Elschenbroich.

She enjoys pursuing projects outside of classical music, performing in Aladdin in the West End, in Live Lounge recordings for BBC Radio 1 with groups such as The Kooks, We Are Scientists and Cinerama, in sessions for COOL Music and English Session Orchestra, and participating in world music improvisation projects at the BBC.  She also works regularly with the BBCSO education department, conceiving and delivering family pre-concert workshops at the BBC Proms and the Barbican Centre, and has coached chamber music on the Pro Corda Primary Course.

Anna plays on a violin by Joseph Gagliano, thanks to a generous loan from the Abbado Trust.